Gerry is now exploring the outrigger canoe world with a team in Lanikai. Basically, you practice 3 times a week, and once you get knighted by the master steersman, you can also participate in one of the many competitions that are being held all over the Hawaiian islands.

The outrigger canoe is truly magic and versatile. It has been the main mode of transportation for Polynesians for thousands of years, and I now understand why. It was designed to be fast but also survive big storms and waves. The canoe actually surfs very well, in fact it stays on waves much longer than any surfboard or stand-up paddleboard.

Last weekend the 111 men’s teams from around the Pacific participated in the Molokai Hoe Canoe Race (the women had their turn two weeks earlier), a 41 mile race from Molokai to Oahu, which is regarded as the world championship of long distance canoe paddling. Shell Vaa, a professional team from Tahiti, won in astounding fashion with a 1.5 mile lead in about 4.5 hours. Team Lanikai finished in fifth or second best team from hawaii.

This video is from 2007 but it gives you an idea of what crews are doing in the 4-6 hours while crossing the channel.

What makes this watercraft special is the fact that it is fast and maneuverable in heavy seas and heavy winds and that you can actually surf it. This week I actually got to steer down some waves (not as big as in the pictures) and that is a real rush. These canoes capsize in waves so you really need to hold your paddle in the right place.

The thing that amazed me about this sport is how many different ways there are to perform a paddle stroke. There are many many ways to do it wrong and inefficient. It is actually quite a complex movement. Contrary to what I believed, you do not pull with your arms, but use your entire body, particularly your upper torso. The other thing that makes this sport great is that timing makes all the difference, i.e. a team in sync has to paddle only half as hard as a team that is only slightly out of sync. The first paddler leads the stroke rhythm, the second calls out the changes from left to right, usually every 15 strokes. Anyone can do it and it is great exercise. On any given day there will be dozens of canoes paddling in the bay, which is a beautiful sight. 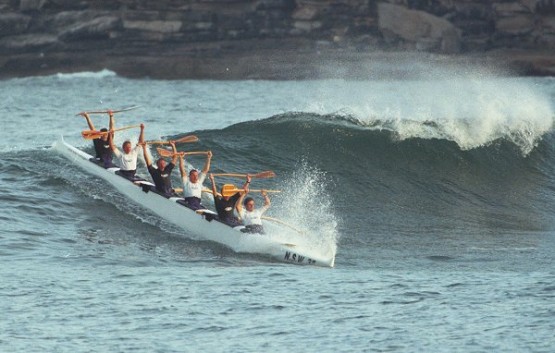 going down the face 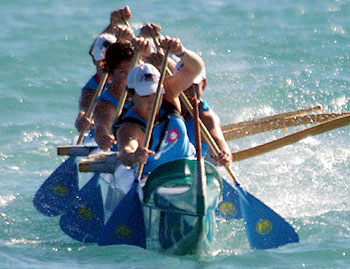