The further you move away from Kona on the West coast or Hilo on the East coast, the more you get „off the grid“. There are plenty of places deep in the lush vegetation or high up on the mountain or far down in the South were people live completely undetected: no visitors, no telecommunication, high independence from the outside world due to self-sustainable practices (direct access to energy, water, food). Basically, nobody knows that these people are there, and they just love that, in fact they thrive on this fact, they truly try to “get away from it all”. Not quite the life of a hermit in Bhutan, but as close as you will get in the Western world I guess.
All kinds of fruit grow South of Kona, which makes sustainability that much easier. It is lush and green and very laid back. In Kahanamoku Bay Captain Cook was stabbed to death when landing on the shores of this beautiful bay and things got a bit out of control. Across the way is a beautifully restored Hawaiian village by the sea, the city of refuge. 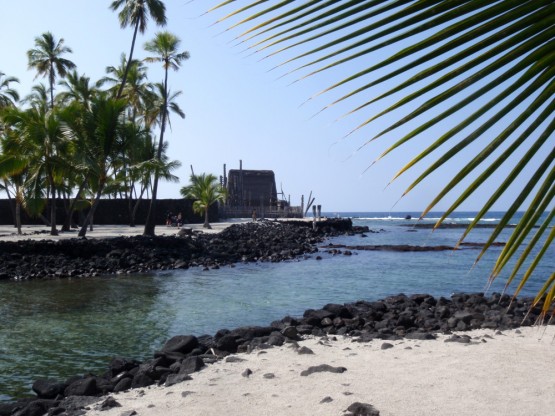 Gesine tried to be a Samoan to get a coconut, but even on this very slanted palm tree it proved very difficult. Samoans are experts at this and are actually hired everywhere to cut down palm tree leaves and coconuts. They will climb straight palm trees to the top the trees, which are in some cases higher than ten meters, with only a seat harness and a machete. The reason for this is that quite a substantial number of people get seriously injured and killed by coconuts, more than the annual mortal shark attacks. 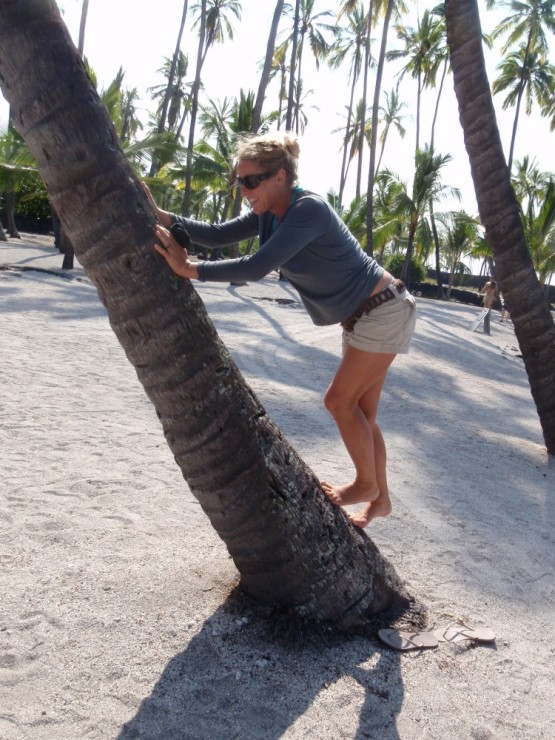 The Hawaiian settlement features a temple with some beautiful wooden carved god sculptures, male and female: 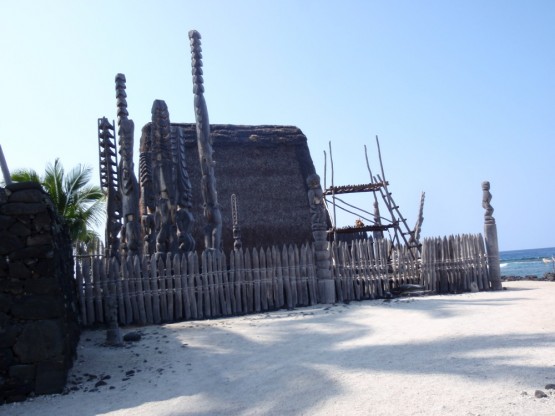 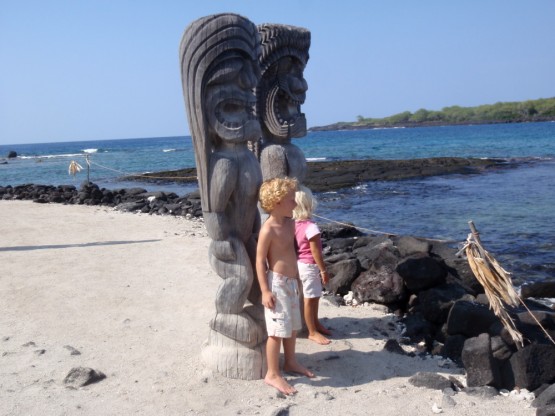 feeling the power of the gods 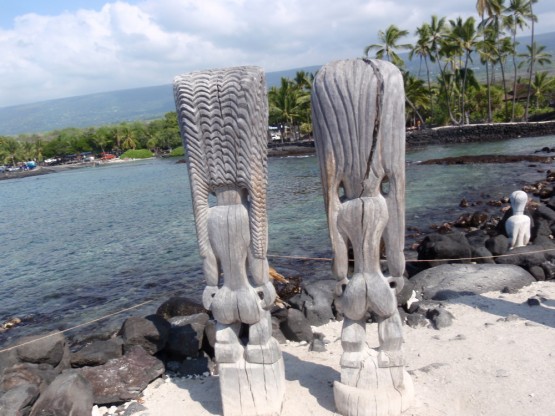 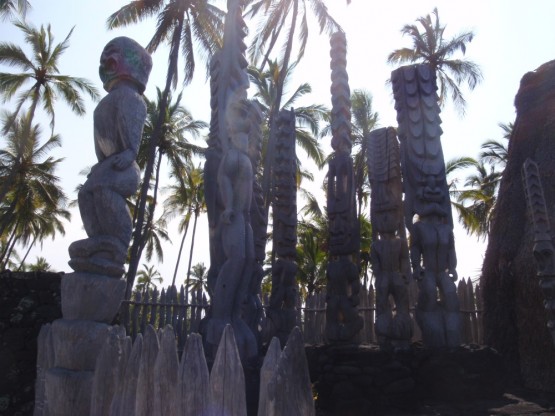 South Point is the Southermost point in the US. You face Kiribati, Tahiti and the rest of the tropical South Pacific Islands, but there are a few thousand miles to go. It is commonly believed now that the Polynesians ventured North in voyaging sailing canoes that held a crew of 10-20 with enough supplies to last for months, with navigation only by stars, without any of the instruments that James Cook and his fellow explorers would have on board (sextant, compass, clocks etc.). The point is rugged, bare, windy, and it feels a bit like the end of the world. Fisherman pull in big fish off the edge of the cliff, they have even built special pulley systems to pull in the very big ones. 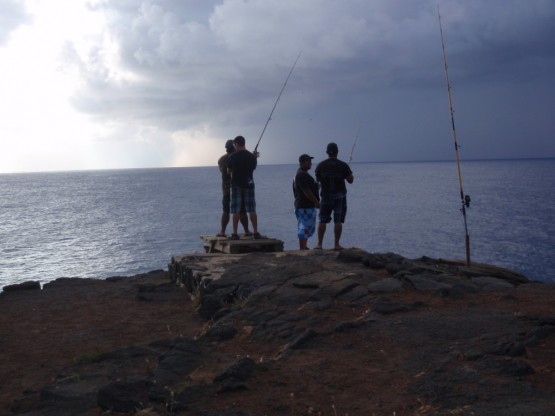 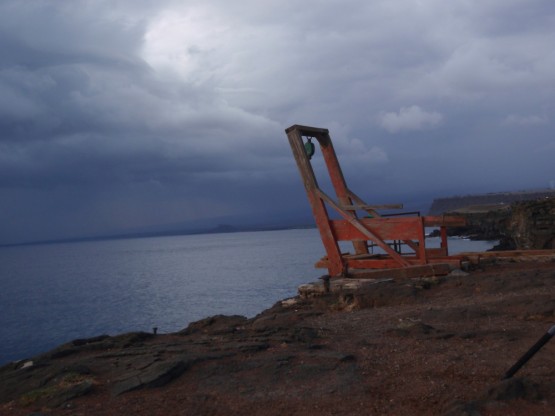 for the really big fish

Around the corner is Punaluu, home to a bakery that makes very tasty rainbow sweet bread. 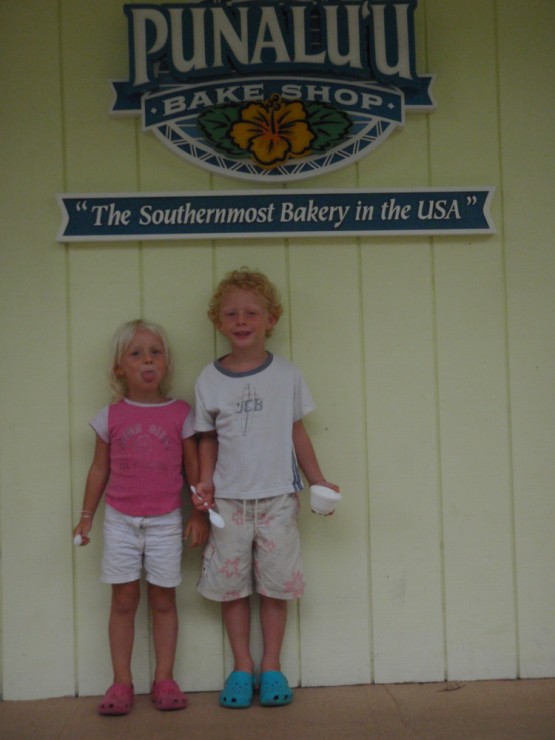 And just a few miles North is a very welcoming Punaluu beach park, not far from the raging volcanoes… 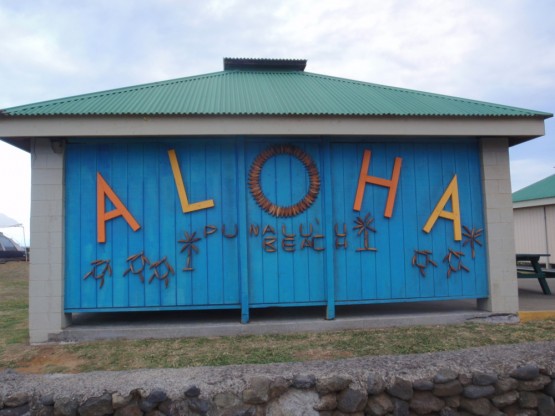 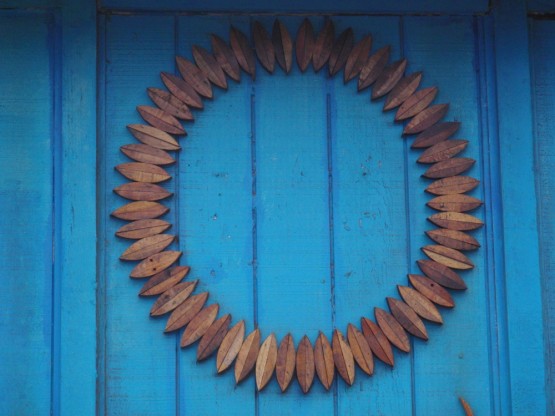