If you want to get in touch with Mother Earth, you will not get much closer than at the volcano on the East side of Big Island. This is where you get close to Pele, the goddess of fire and creation. The volcano is very active, it has been actively expelling gases, fumes, and lava for the longest period longer than any other active volcano currently on the planet (since 1984). To see earth being created and new land being formed is a truly breath taking experience, it is so real, so raw, so fundamental. This place seems to be one where you get the experience up close, without the usual risk of getting hit by an expelled rock, being put to sleep by toxic gases, lava spitting on you, falling into a crack in the earth etc. which seem to be part of exploring volcanoes in other parts of the world such as Indonesia or the Philippines. There is actually a town of 4000 or so souls called volcano (no one really knows because of the “off-the-grid” thing, which has attracted an eclectic mix of hippies, eco-freaks, artists and athletes who like being close to Pele. It is cool up here and we were very fortunate to stay in Oma’s hideaway, which featured a fire place, a very cozy place to have our cup of tea after long volcano hikes: 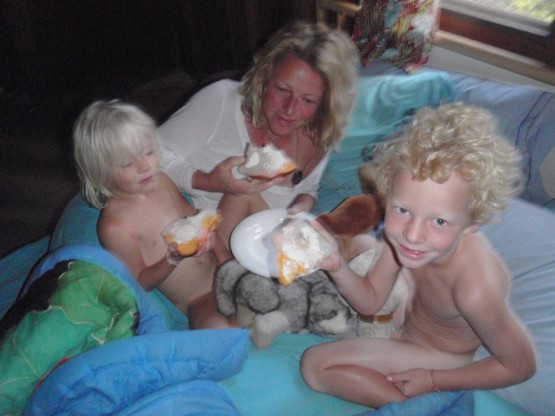 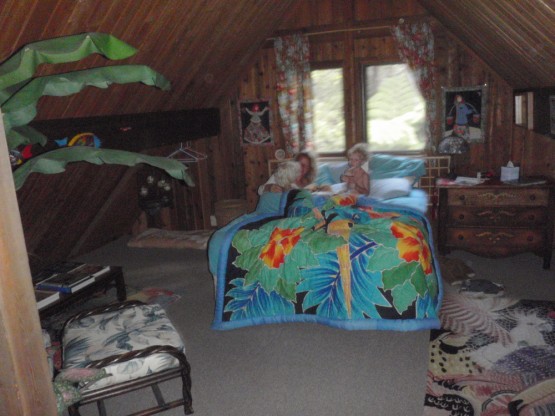 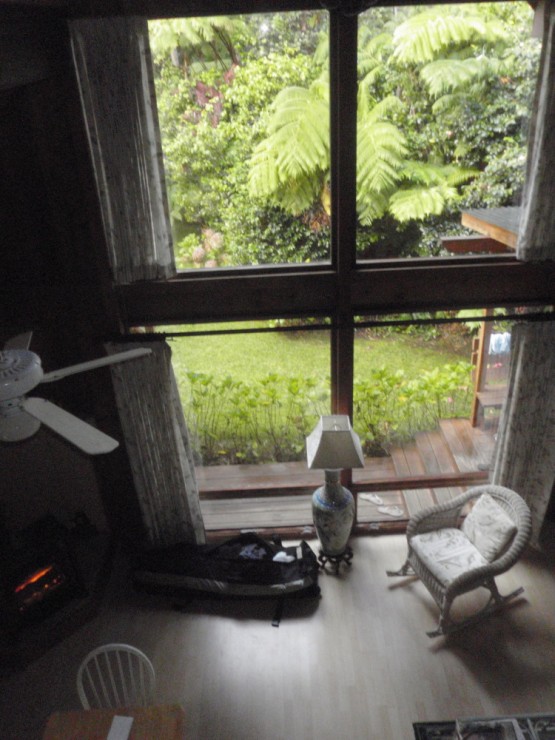 Due to the toxic gases, the main crater in the park can only be viewed from afar, but you can see it spewing and boiling at day and night from the museum in the park: 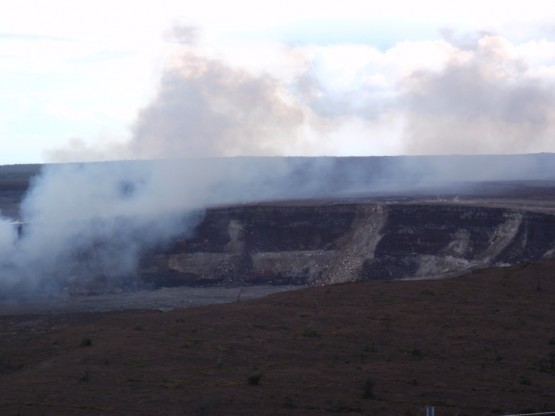 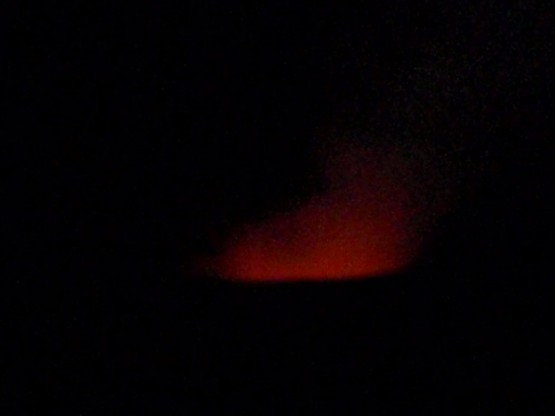 This is a lava tube that you can walk through for about half a kilometre, sort of like a pipeline that the volcano has formed to get rid of his pressurized magma: 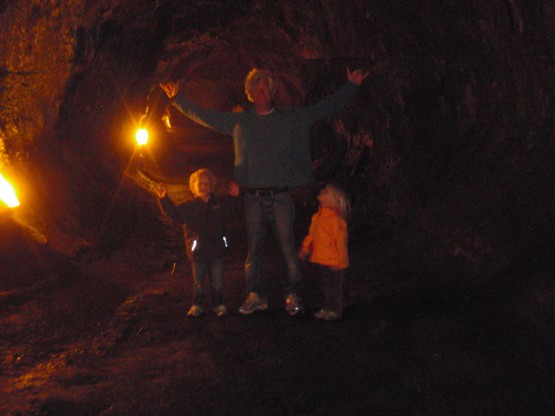 The museum is very cool and explains the whole creation process of the Hawaiian islands very well, here is an example of Mauna Kea, the largest peak in the chain with over 4000 meters above sea level.

The IKI loop hike takes you through rainforest and straight down into the crater, where you walk across the cold lava, which has cracked over the years: 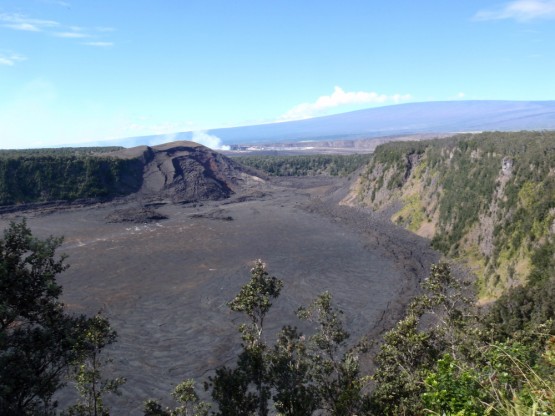 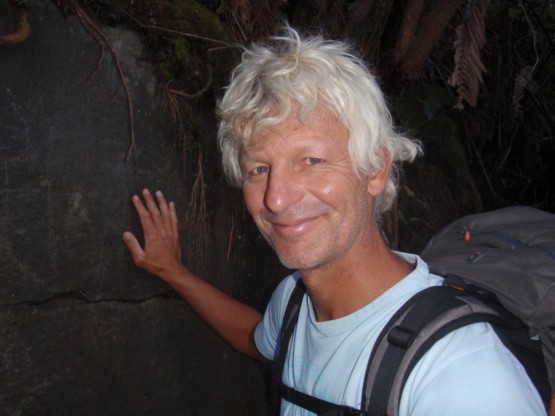 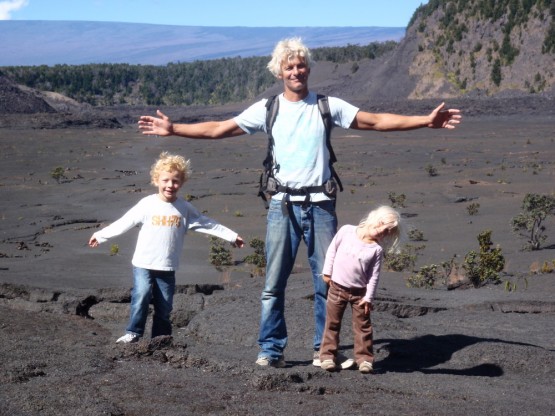 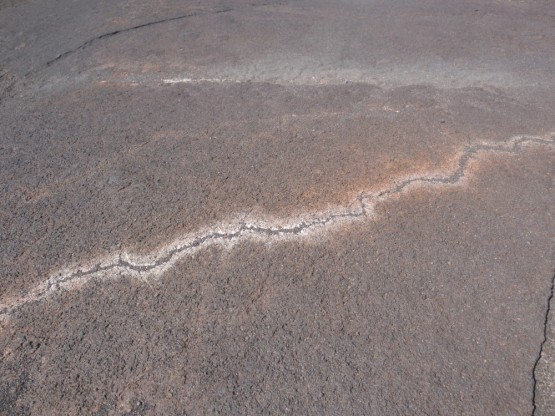 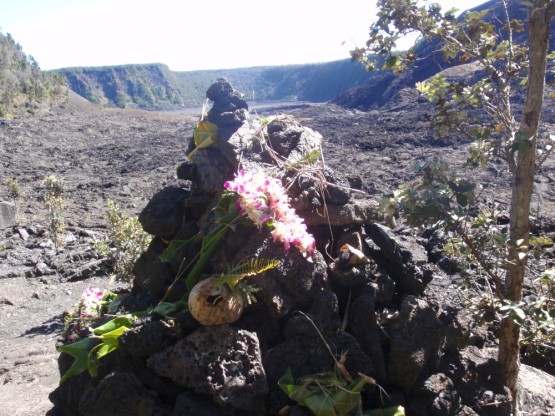 The chain of craters road takes you through massive lava flows from the past decades, very fresh land that has formed, all the way down to sea, where you can see the ocean lava flow in 2 km distance. 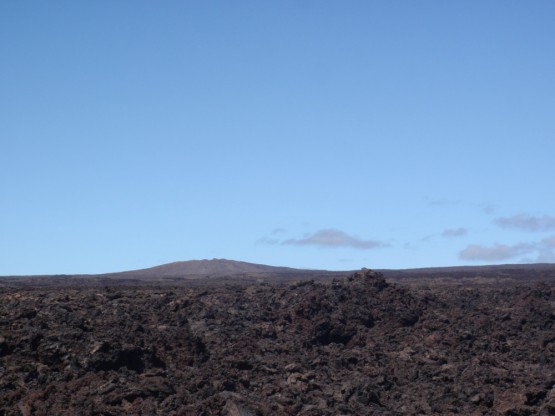 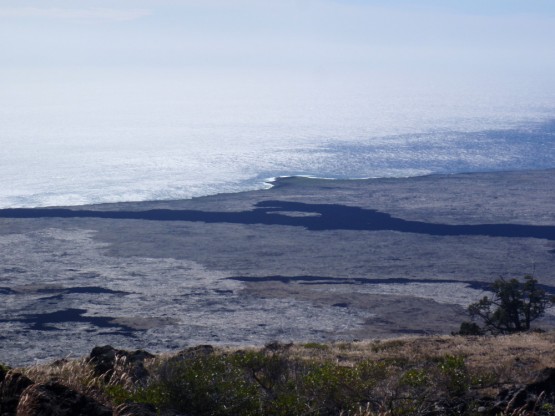 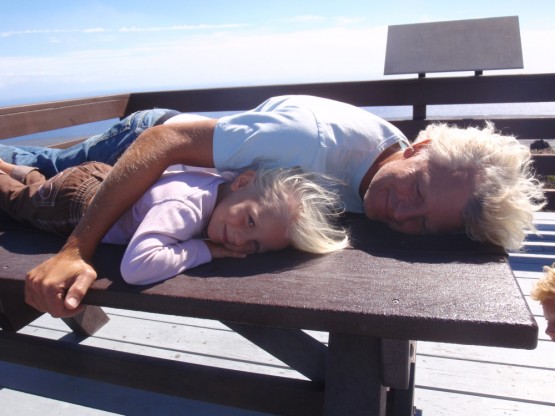 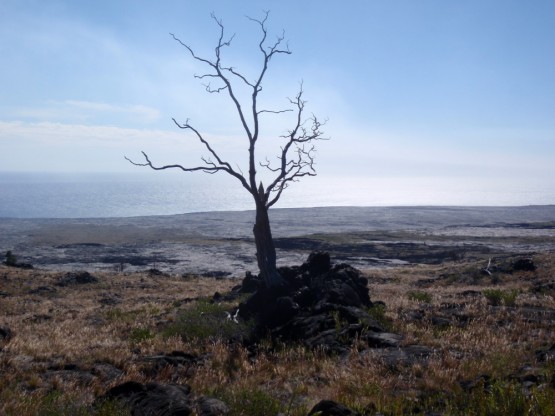 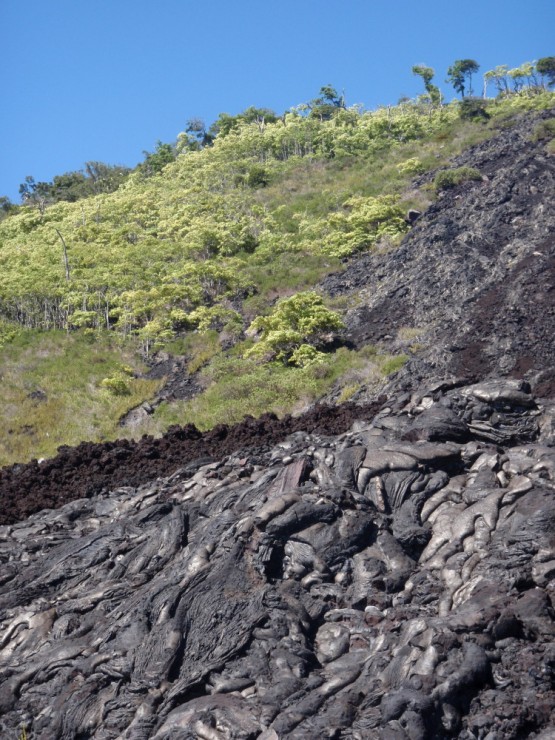 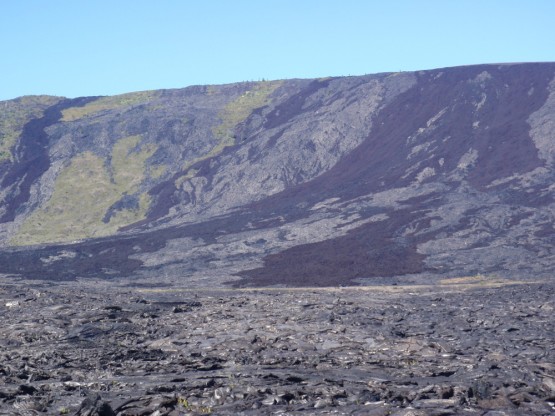 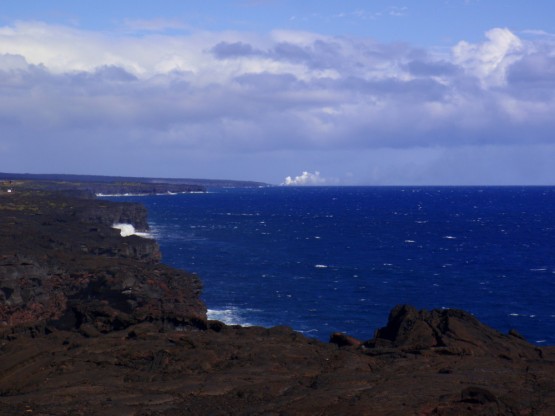 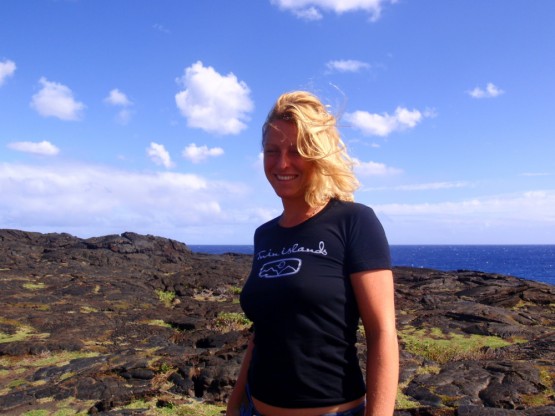 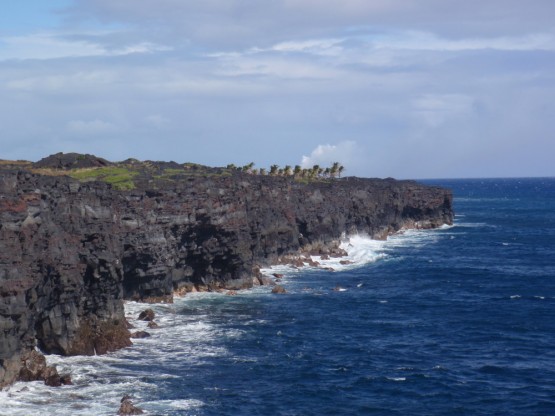 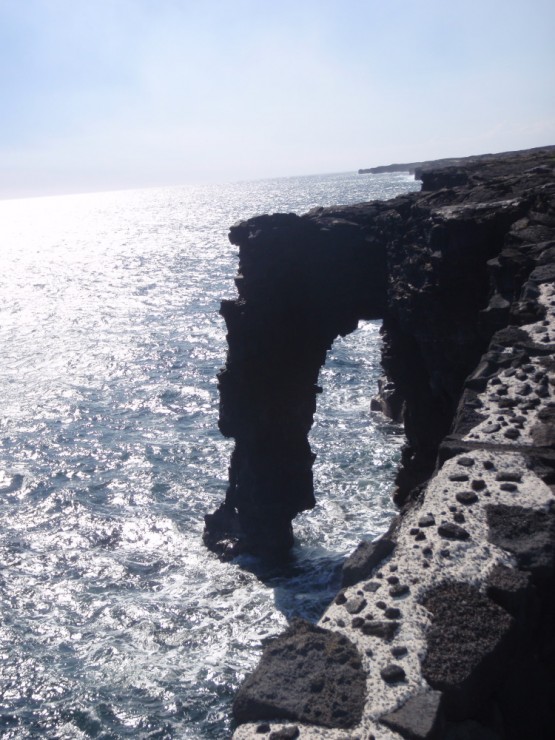 From the North end you can walk at night to within about 1 km of the ocean entry, across broken lava with a flash light. We brought a picnic and watched Pele push her fire into the ocean, constant explosions and fumes going into the night sky. 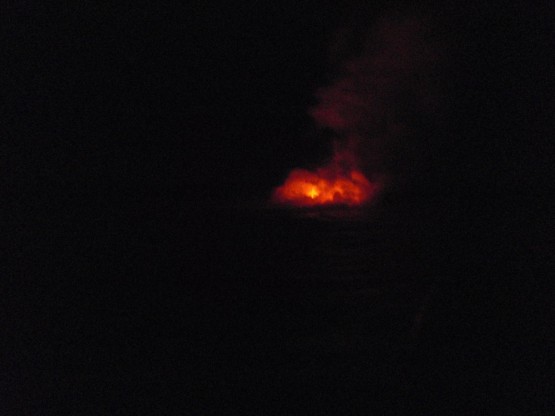 The best way to experience the volcano is actually not a privately guided walk or the helicopter, but a trip on a boat, especially when it is blowing East, which means the steam and fumes are being blown inland. The trip on the Lava catamaran was one of the most breath-taking experiences I have had in my life. It starts with your alarm clock going off at 3 am, so you can meet the captain at 4 am to drive down to the jetty where you then step up onto the catamaran. With everyone on board the boat is launched into the sea, and then we crashed through the rolling seas for about 40 minutes in the dark, an experience which put any roller coaster I have ever been on to shame. Hold tightly onto your seat and stretch your back at 3 in the morning are the two big pieces of advice I have for you! Oh yes, and bring a rain jacket as you will likely be soaked by the time you get to the lava flow. The reward is gigantic: captain Jack brings you within 3-5 meters of the actual lava flowing into the sea. I was amazed that the huge surf did not wash our boat onto the black sand beach that had just been created the night before. The lava flow is constantly changing, every time you look at it something has changed, a column has collapsed, a new flow has started, another ones is slowly turning black, lava rocks flow in the ocean, rocks explode in the ocean, there are hissing sounds everywhere. The water actually heats up to nice shower temperature. For the next hour all you do is watch in awe as the captain manoeuvres the boat back and forth from the lava walls in raging seas. This is raw pure mother earth energy within spitting distance. Even though static images are a poor representation of the experience, here is a sample of what I saw: 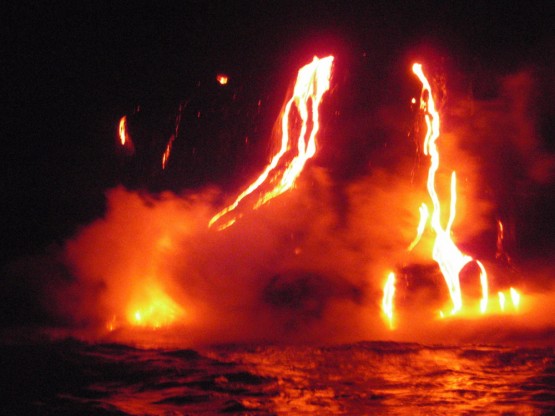 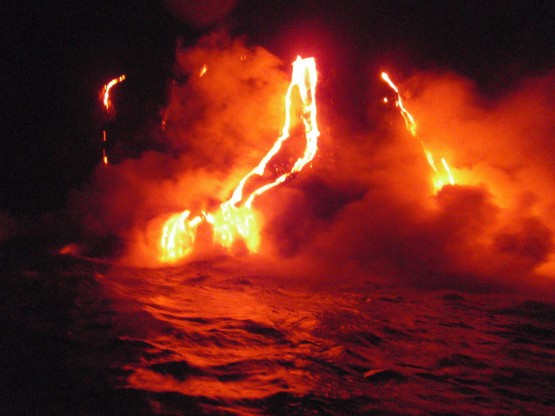 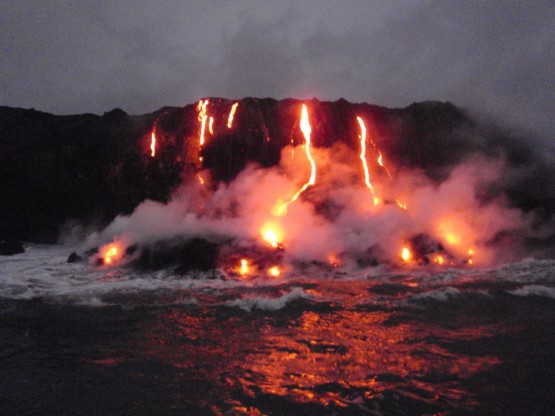 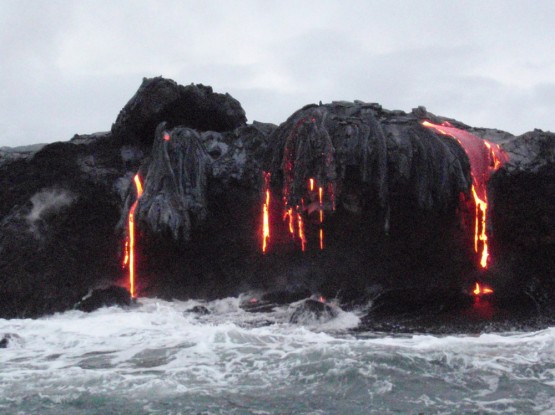 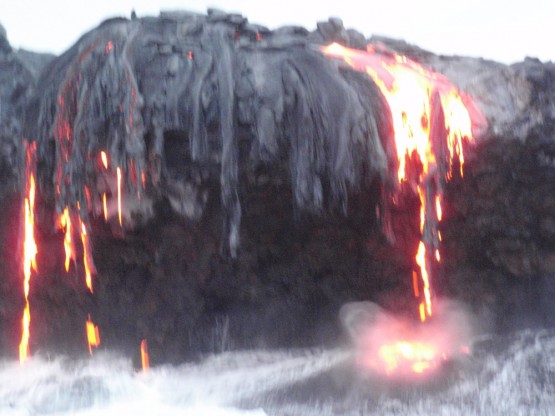 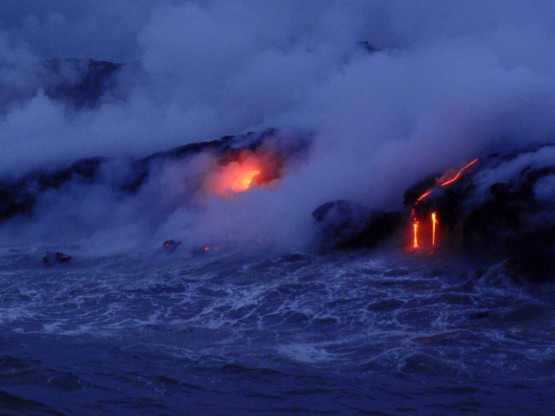 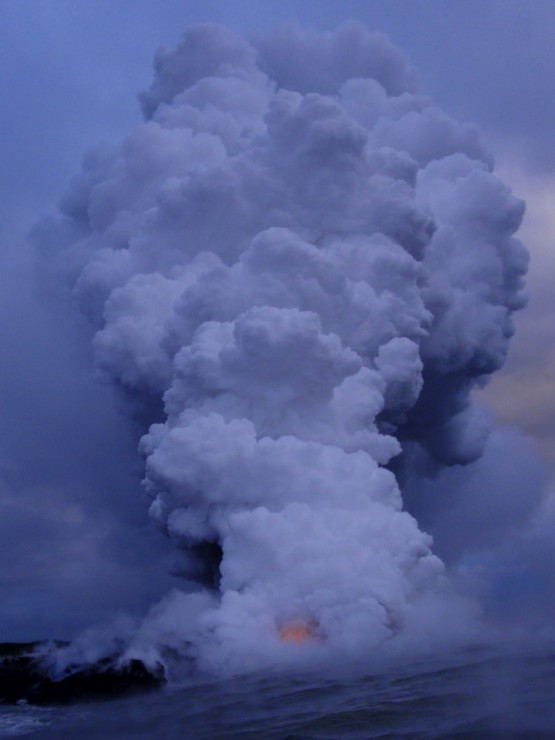 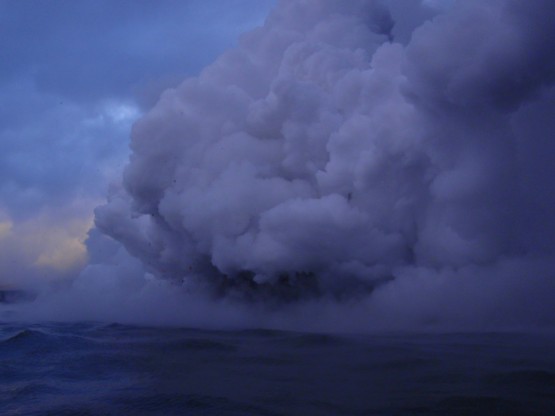