One fine morning in December, just as 30,000 mad souls embarked on an average 4 hour run along the West Side of Oahu (the start of the Honolulu Marathon is at 5 am), it was time to say good bye to Hawaii, which actually felt like our home after half a year. Despite some serious reduction efforts, our luggage had grown to 14 pieces, mainly water sport gear such as boogie boards, surfboard, kite surfing gear. But luck struck again at the airport with Air Pacific (Fiji’s national airline) taking it all on board without extra charges. At 6 am Marian, who has a passion for storm watching, gave us a call to inform us about cyclone Mick which seemed to be heading directly for Fiji. 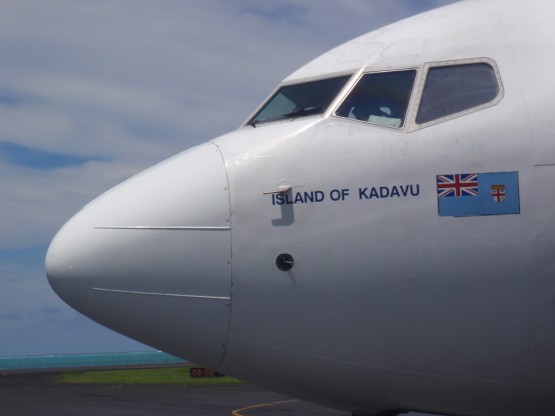 Our Boeing 737 wore the name of our destination, the island of Kadavu

The pilot decided to stop in Samoa for some extra fuel so he could circle around Fiji for some time and return back to Samoa, if required (we were in a Boeing 737). Mick – like most cyclones – was very moody and had a mind of his own and decided to strike more rapidly: by the time we had refuelled it had reached the East side of Viti Levu, the main island of Fiji. So the pilot made a quick decision to disembark us into the transit area, and half an hour later he concluded that any effort to reach Fiji that evening would put any suicide kamikaze roller coaster ride to shame.

The first terms you will learn in the Pacific are related to time, in this case “Samoa time”. This basically means that there is no rush, you should go with the flow, and patience of unfathomable extent is required to have a good time – a true challenge for most travellers from the Western world. Samoa was our first true test. 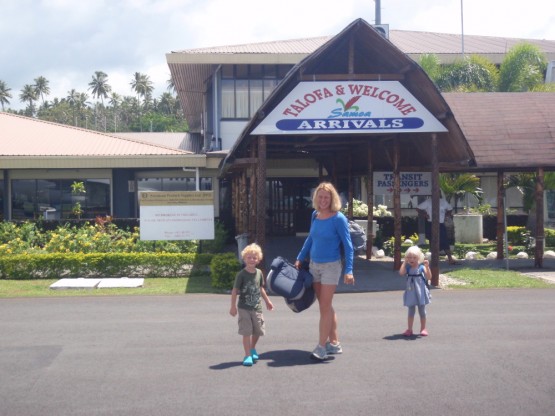 It took an eternity for the immigration official to arrive at the airport (we were the only plane on the airport and as we were not scheduled to come in, the airport was not really open or operational). In what seemed like hours later, a nice lady arrived who then instructed all passengers to throw their passports onto a big pile on her desk. 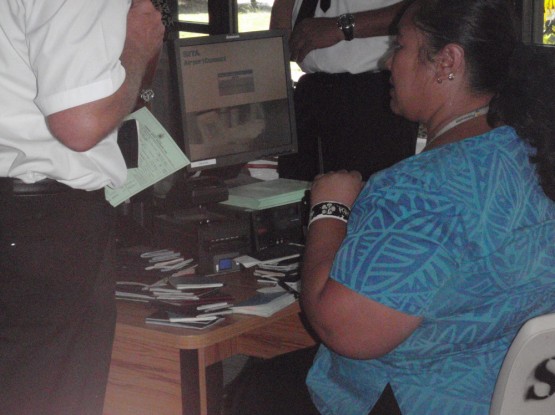 173 passports and one immigration official

She then personally filled out 178 two page immigration forms with a pen. There was an amusing scene when one bored Tongan rugby player started grabbing packs of 20 passports and flipping through them with apparent interest, probably looking for inspiration for naming his 7-11 kids which were likely going the fill his home in the next few years. This was fine with us, but some frantic American ran to the desk and started complaining loudly, finally located the customs lady and made it clear that the world was just about to end, well at least the data security world. The customs lady was clearly under the impression that browsing through passports was ok in the pacific, but to keep peace she kindly asked the strong Tongan boy to engage in an alternative activity.
She then randomly called out names and handed passports and forms to the ones who would respond to a name. On we went to the immigration officials, and to retrieve our 14 pieces of luggage. Three were not there and we were told that they are still on the plane, with no apparent logic to this, but also not much we could or wanted to do about it. We moved the luggage straight from the belt to the curb side where they were whisked from our hand into a large van. Clearly, it was best just to give up any form of control of what was happening with or to you, the state that is usually induced by alcohol or narcotics. On we went for a half hour drive along the North end of the island, along beautifully painted houses right on the sea, with ladies dressed in beautiful white walking home from their church service. We arrived in the nation’s capital Apia, at Aggie Grey’s hotel where we were treated very pleasantly, but only for a few hours. It seemed the captain had an appointment back in Fiji as he informed all passengers that wake-up time was 2 am, with a 2:30 am departure from the hotel and a 5 am scheduled plane departure. Needless to say Samoa time struck again and we spent a few hours going through Samoa departure processes. Any junior McKinsey supply chain consultant would have a dream project here, making the airport run more efficiently. But honestly, Samoa – and the entire Pacific for that matter – does not really want or need efficiency! They love their slow life and it shows. You will be hard pressed to find stressed people here, people love the spontaneous and happy life here in paradise. Besides, it is way too hot to work hard. Man is made to chill on these islands.

We arrived in Nadi, the only international airport in Fiji in the morning of the cyclone aftermath, and Pacific Sun, the only local feeder airline, managed to get 1 out of 43 scheduled flights to its destination this day. That was expected and fine. Our destination was Kadavu, the fourth largest Fijian island, located about 45 min flight to the South of Nadi. The next 24 hours we experienced the classic small country transportation / communication chaos which requires a large dose of calmness and endurance and hope as the best coping mechanism. At my 11 visits of the Pacific Sun airline check-in counter (they did not seem to have an office) it took incredible sociological skill to figure out who is in charge (to this day I have no idea). This resulted in me speaking with about 15 different representatives, and not surprisingly, depending on the time of day and who I spoke with I received vastly different answers. The airport in Vunisea on Kadavu seemed to be closed, that was a fairly consistent message. Why and what was done to fix it was unclear. The most frequent answer was that it was going to be closed for the next two weeks, which would have resulted in a complete abandonment of our plans for Fiji. The only other option to reach Kadavu was to hire a waterplane for 2500 US$ one way or to take a ferry from Suva (3 hours from Nandi by car) which takes 5 to 14 hours to get to Vunisea (again no clear answer here) and leaves only once a week but no one really knows when. Towards the end of the 24 hours the “mild persistence” strategy paid off: I picked three guys who seemed to have some idea about what was going on (they ran around with walkie talkies), made friends with them, presented my family (making them look exhausted) and pleaded nicely but with increasing frequency that the airline should find a way to get us over to Kadavu. Within an hour I received a call that we were four of the lucky eight passengers ready to head over to Vunisea on an amphibious seaplane (starts and lands at normal airports or on water). One hour later we sat in a Twin Otter and headed South (we even managed to get our kite surfing gear on board), across the Viti Levu mountains and turquoise atolls, and touched down in Vunisea Bay where we transferred onto a boat to get to shore. What seemed completely impossible only 24 hours earlier had become reality: we had reached the shores of Kadavu… 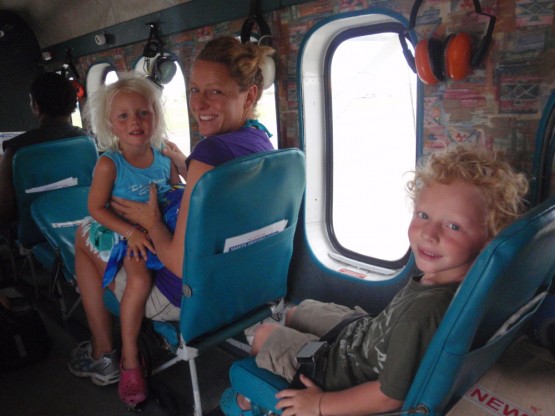 Inside our Twin Otter amphibious plane 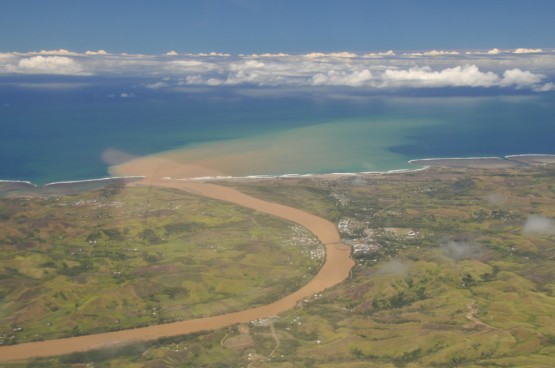 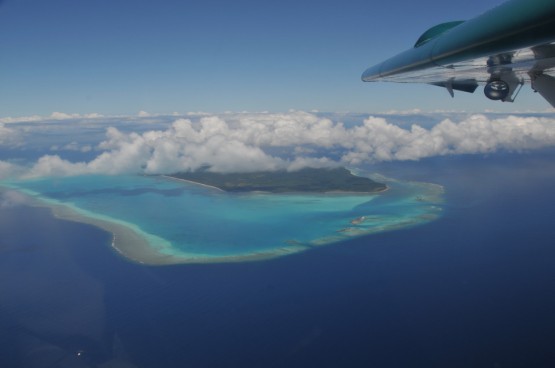 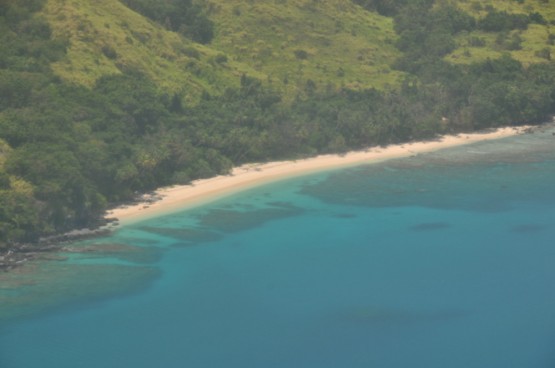 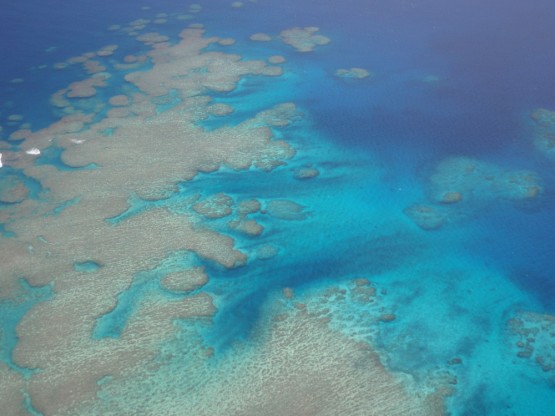 no chemicals here, these reefs are alive!! 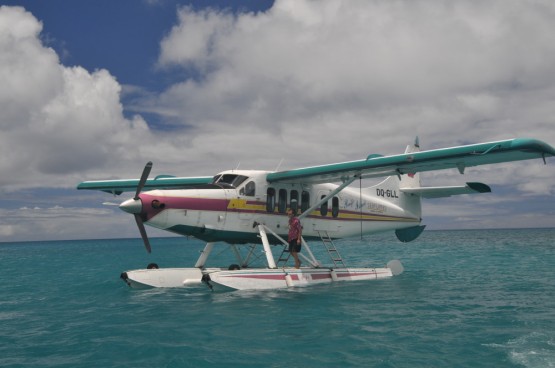 Captain Jack made the seemingly impossible reality: getting us to our Fijian destination Vunisea on Kadavu